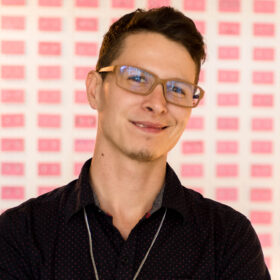 Andre Perez (he/they) is a Latinx educator, filmmaker, and community organizer whose practice centers collaboration, multimedia storytelling and public conversations. They attended their first AMC in 2006, founded the Transgender Oral History Project in 2007, and helped grow the Trans Lifeline from a 100K organization to a 1.1M organization from 2013-2015. They recorded 500 interviews as part of StoryCorps, including 50 segments broadcast on WBEZ and NPR.

Andre went on to Direct America in Transition, a Sundance-backed documentary series exploring community, family, and social issues with trans BIPOC that debuted at Outfest Fusion in 2018. After appearing on NewCity’s 50 Influential Filmmakers in Chicago, Andre was honored to participate in Doc Society’s first-ever Queer Social Impact Producer’s Lab. They launched a community engagement campaign focusing on the South and Midwest that partnered with 65 institutions (including MIT, Allied Media Conference, and Creating Change) to host more than 85 screenings, workshops, and conversations in 15 states and 4 countries. In their off time, Andre scuba dives and reads about transformative justice while jamming to reggaeton.