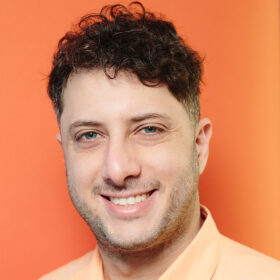 Mike Medow serves as Allied Media Projects’ Director of Finance and Operations. He has worked at AMP for 15 years and helped lead important transitions including bringing the Allied Media Conference to Detroit, launching the Sponsored Projects Program, and growing the organization’s communications and operational capacity. Mike is currently focused on implementing finance systems and processes to meet the complex needs of AMP’s programs and projects, as well as supporting the development of the Love Building as a permanent home and hub for AMP and its partners.

Mike serves on the steering committee of Detroit Jews for Justice, and he previously served on the board of directors for FoodLab Detroit from 2014-2016. He is a 2013 Marshall Memorial Fellow of the German Marshall Fund. He is a graduate for the University of Michigan.

Mike is a co-founder of record labels Emergence Media and Sector 7-G Recordings, and holds several dj residencies around Detroit. He worked with friends in the local dance scene to produce the Dance For Democracy event series focused on get-out-the-vote during important local and national elections.