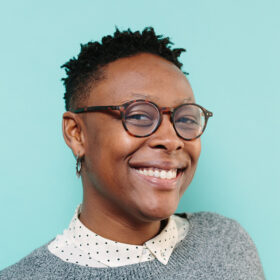 Nandi Comer is a poet, writer, and teacher who serves as the Director of the AMP Seeds Program. Along with the youth of Detroit Summer’s Live Arts Media Project she attended her first AMC in 2006. Since she has participated in AMP in various capacities including a volunteer and the AMC advisory board. In 2014 and 2015 she was the AMC volunteer coordinator. She specializes in literary arts and youth education with particular interests in adolescent arts engagement. She is the former After School Program Coordinator for River Rogue Public Schools and former Community Projects Coordinator for InsideOut Literary Arts Project.
Outside of youth education and her work at AMP, Nandi is active in the Detroit literary community. She is the lead poet in Techno Poetics, an interdisciplinary performance project that draws from the history and structure of Detroit Techno in order form new pieces. She is also a big fan of Lucha Libre and is currently completing her first poetry collection about the sport titled Tapping Out.