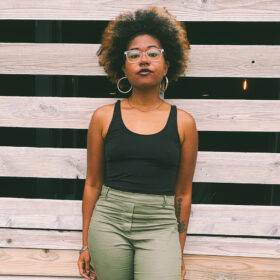 Adrienne is 28-year-old native Detroiter raised on the east side of the city. She loves envisioning portals that will result in healing-oriented and thriving black futures fit for the transforming communities and hoods she’s apart of. Black futurism is the framework used to ideate and manifest her projects usually side by side with Detroit based black teens, through mediums related to film, or by incorporating various healing modalities into community engagement. Her experience with hands-on organizing and black liberation work started in 2012 as apart of progressive political campaigns and from 2015-2017 she was the Co-Lead organizer for the Detroit chapter of Black Lives Matter. Adrienne’s work with youth dates back to 2014 while interning to obtain her BSW and from 2015-2018 her approach was transformed through her work with the Children’s Defense Fund Detroit Freedom Schools sites. Her most recent contributions for her communities include the annual 2019 Afrofuture Fest held at Feedom Freedom, the 2019 Afrofure Film Series featured at the Creators Den and Detroit’s Live 6, Thrift Store Music 2 featured at Detroit Clothing Circle in Oct 2019, & a June 2020 featured installation apart of the Altar Call exhibition at Detroit’s Room Project. She obtained a BSW from Eastern Michigan University and a Masters in Community Development from the University of Detroit Mercy. Outside of directing AFY, Adrienne facilitates Intro to Black Futurism and Intro to Ancestor Connection programming, is a Detroit elementary school teacher during the week, and is a certified level 2 reiki practitioner.