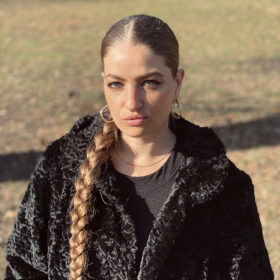 Jessie is a filmmaker, artist and educator. Her most recent film Baby, inspired by and made in collaboration with young people she worked with in NYC public high schools, was awarded the Grand Jury Prize for Best Narrative Short Film at Outfest, was featured as a Vimeo Staff Pick, and is screening at film festivals around the world. Her queer documentary series Signified was presented by the Guggenheim Lab, and her film The Greggs won the Spirit Award at Slamdance. Her work has been featured at film festivals, The Brooklyn Museum, MFA Boston, Leslie Lohman Museum, and in Teen Vogue, HuffPost, and Them. Passionate about community based media as a tool for movement building and social justice, Jessie taught filmmaking in NYC public schools for many years and served as the longtime director of Youth Documentary Workshop at NYC’s Educational Video Center. She received her BFA in Film & TV from NYU, and lives in Brooklyn NY on Lenape, Munsee and Canarsie land.