When 18 Million Rising launched in 2012, there were approximately 18 million Asians and Pacific Islanders in the United States, representing nearly 6% of the total population and growing faster than any other racial group. Despite that, Asian Americans remain one of the most politically under–represented communities.

Our organization was created in response to an enormous untapped opportunity to educate, activate, and organize young Asian Americans who are seeking a progressive political home.

We believe that the internet is a rich place for this work, because the web isn’t just a medium of communication, it’s also an engine for culture, collaboration, and changemaking. Our digital-first advocacy tactics elevate the voices of and mobilize our over 150,000 members to take action on issues that impact Asian America.

Together, we’re building a world where our experiences are affirmed, our leadership is valued, and all of us have the opportunity to thrive. Join us! 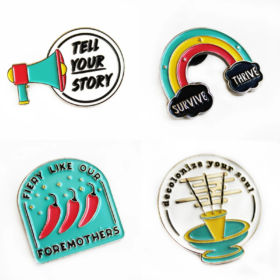 18 Million Rising partnered with artist and graphic designer, Safwat Saleem, to celebrate Asian American power and resistance with this 4 pack of enamel pins. In each pack, you will find four custom-colored enamel pins: Survive and Thrive, Tell Your Story, Fiery Like Our Foremothers, and Decolonize Your Soul.