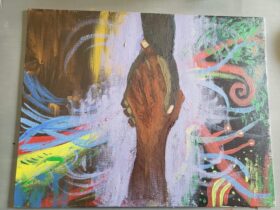 Brothers Doing Better is an intentional healing space for Black, Brown, and Indigenous masculine identified people to heal from and move past the trauma and learned behaviors from patriarchal violence, cis domination and sexism/queerphobia.

We do this by working in a group setting every 20th of the month reading and discussing the works from different womanist scholars like Bell Hooks, Audre Lord, and Angela Davis. We also work closely with different queer and femme led organizations in Buffalo NY. Story BDB was started in 2018 just at the height of the #metoo movement when gender-oppressed activist of color in the city of Buffalo NY put a call-out to masculine identified people across the city to unlearn some of the toxic patriarchal behaviors that we were taught in this society from an early age. We were also asked to do this reflective work amongst ourselves as a way to not once again put the emotional labor and burden on women of color and other gender-oppressed people as cishet men often do. We work primarily as a way to hold masculine identified people of color accountable to the gender-oppressed within our community. Or as womanist writer Adrienne Maree Brown says to men, “relinquish the patriarchy.”

Thank you so much for donating to Brothers Doing Better, your gift to our cause helps us keep our doors open to new members who wish to unlearn patriarchy and internalized anti blackness and work in solidarity with other oppressed people globally.