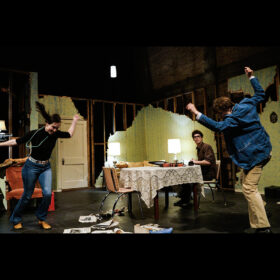 THE HINTERLANDS is a Detroit-based company creating performances and public events that are highly irrational and deeply American. From our original touring pieces to the events we curate in our Detroit neighborhood, our work is created through an ongoing physical and vocal practice, long-term research into our personal and collective histories, and daily engagement with the place we live and the people who live there.

Formed in 2009 by Richard Newman and Liza Bielby, The Hinterlands have created dozens of works spanning from touring theatre pieces (The Radicalization Process, Manifest Destiny!), works for museums/galleries (Voice of the City, uTopian Dinners), neighborhood-based events (Porous Borders Festival, Freeways and Side-streets), and international collaborations (The Enemy of My Enemy, Invisible Cities). This work has been seen at the Shanghai Biennale, The Flynn Center, MOCAD, and The Berlinale, but also at our friend Dave’s house, the mattress store at Halleck and Conant, and ZamZam Restaurant.

In addition to our own performance work, The Hinterlands are artists-in-residents and program curators of Play House, a Detroit neighborhood-based performance space that we manage in collaboration with Power House Productions. This has allowed us to support the work of artists we admire through rehearsal residencies, performance presenting, and workshops as well providing a space for community activities ranging from political organizing to weekly sing-a-longs.

The Hinterlands are members of the Network of Ensemble Theatres, the National Consortium of Training and Place-based Theatres, and the Arts, Culture, and Commoning Working Group.

Our most recent full-length performance, The Radicalization Process, uses live site-specific performance, archiving, and print media to explore the intersection between radical art and radical performance. Our next work, The Enemy of My Enemy, is a three-year project in partnership with Chinese, Russian, and Iranian artists, playwrights and community members to create a series of genre-busting performances that investigate perceptions of the US abroad and push the limit of theatre as a means for grassroots diplomacy.

The Hinterlands also curated and organized The Porous Borders Festival, a two-day festival exploring the municipal and cultural borders along the Hamtramck/Detroit divide. The ensemble has conducted multiple international collaborations including The Breaking Bread Performance Project in Kosovo and numerous exchanges with Chinese performance artists in Chengdu, Shanghai, Zigong, and Beijing.

Donations to The Hinterlands will be applied towards “Will You Miss Me?” – a performance tracing the pathways of migration, settlement, and assimilation of white Appalachian workers in Detroit.

Donate to The Hinterlands
Close