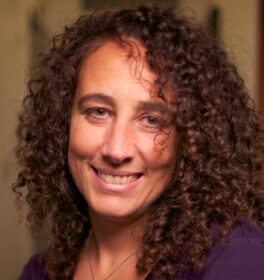 Andrea J. Ritchie (she/any) is a Black lesbian immigrant survivor, a leading expert on policing and criminalization, and the author of Invisible No More: Police Violence Against Black Women and Women of Color, and co-author of No More Police. A Case for Abolition, Say Her Name: Resisting Police Brutality Against Black Women; and of Queer (In)Justice: The Criminalization of LGBT People in the United States.

She has been documenting, organizing, advocating, litigating and agitating around policing and criminalization of Black women, girls, trans, and gender nonconforming people for the past three decades, and actively engaged in anti-violence, labor, and LGBTQ organizing, and in movements against state violence and for racial, reproductive, economic, environmental, and gender justice in the U.S., Canada, and internationally since the 1980s.

Andrea co-founded Interrupting Criminalization with Mariame Kaba, as well as the In Our Names Network, a network of over 20 organizations working to end police violence against Black women, girls, trans and gender nonconforming people, and led INCITE!’s work on law enforcement violence. In these capacities, and through the Community Resource Hub and National Black Women’s Justice Institute, she works with dozens of groups across the country organizing to divest from policing and secure deep investments in community-based strategies that will produce greater public safety.

Andrea is an experienced public speaker, trainer, and facilitator skilled at engaging audiences large and small in community, academic, and organizational settings.

New! From Andrea J. Ritchie and Mariame Kaba – No More Police. A Case For Abolition

The authors of this timely new book urge us to change the way we understand and seek safety, sharing lessons from this persuasive primer exploring movements for police abolition through a Black feminist lens. They make the case that police reform cannot end the violence of policing, and that preventing, interrupting and healing from violence, including gender-based violence, requires us to #DefundPolice, and ultimately abolish policing in all its forms. Exploring pathways to abolition through mutual aid, rebuilding the commons, transformative justice, and experiments in creating collective ecosystems of community care, along with the tricks and tensions along the way, Ritchie and Kaba invite all of us to join in the fight for safer, more abundant, and thriving communities. Purchase here!

Invisible No More: Police Violence Against Black Women and Women of Color

Invisible No More examines issues of racial profiling, police violence, criminalization and mass incarceration through the lens of women’s experiences. How do women, trans, and gender nonconforming people experience policing in ways that are similar to other members of communities of color, and how are their experiences unique? What do their experiences teach us about the shape and scope of police violence, and how do they expand our framing of the issues and our demands for justice? How do they call on us to radically reimagine our visions of safety and the means we devote to achieving it? A unique perspective on one of the central issues of our time, rooted in over two decades of experience on the front lines of movements to end police violence.

In the midst of an ongoing national conversation on sexual harassment and assault, one form of sexual violence remains shrouded in silence: when police officers are the perpetrators. Although studies show that sexual violence is the second most frequently reported form of police misconduct after excessive force, it is not the second most frequently talked about, despite the fact that an officer is caught in the act every 5 days. What does sexual violence by police look like? Who do officers target? Most importantly, how can we put a stop to this systemic problem? No survivor should be left out of the conversation, or the solution, just because the person who sexually assaulted her was a police officer.

A set of eleven “No More Police. A Case for Abolition” book stickers (4″ x 4). Design by Naimah Thomas (IG @naimah_creates).