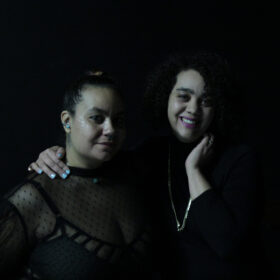 How to Survive the End of the World

A podcast about surviving apocalypse with grace, rigor, and curiosity

Autumn Brown and adrienne maree brown are two sisters who share many identities, as writers, activists, facilitators, and inheritors of multiracial diasporic lineages, as well as a particular interest in the question of survival. Their podcast, How to Survive the End of the World, delves into the practices we need as a community, to move through endings and come out whole on the other side, whatever that might be.

How to Survive the End of the World launched in November 2017, and episodes can be heard anywhere podcasts are found, or by going directly to the website.

In the years since the show first aired, adrienne and Autumn have moved audiences with depthful conversations about surviving conditions of systemic collapse, while holding the space of vision for the world we want to create. The sisters have held live events at the Allied Media Conference, the University of Minnesota, Brown University, and Emerson College.

In April 2020, adrienne and Autumn were awarded Auburn Seminary’s Lives of Commitment Honor celebrating women of moral courage. In July 2020, the show was named one of the best podcasts of the year (so far) by the A.V. Club, citing the 2020 Apocalypse Survival Miniseries.

How to Survive the End of the World is produced by Detroiter Zak Rosen.