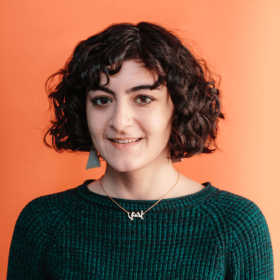 Leila Abdelrazaq (she/her) is a Chicago-born Palestinian author and artist who has served as AMP’s Fund Development Associate since May 2020. Leila supports AMP’s sponsored projects in their fundraising efforts by offering resources, consulting, and feedback on grant applications and fundraising strategies. Leila comes from a background of Palestine and abolitionist community organizing. She formerly served on the National Students for Justice in Palestine Ad-Hoc Steering Committee, and was a founding member of Chicago’s For the People (FTP) Artist Collective.

Outside of AMP, Leila is a writer, illustrator and graphic novelist. She holds an MA in Modern Middle Eastern & North African Studies from the University of Michigan, where her research focused on Palestinian futurist art and post-nationalism. Her debut graphic novel, Baddawi (Just World Books, 2015) has been translated into three languages, and her essays and short comics have been published in outlets such as Kohl Journal, The Funambulist, and The Believer Magazine. Her art has also appeared in exhibitions around the world. Leila is a lover of zines and self-published ephemera, and co-founded a small press and distro, Maamoul Press.