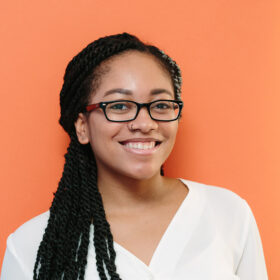 Nic (She/They) manages payment requests, correspond with project leaders and contractors and handle other daily administrative tasks within the AMP office. Nic attended their first AMC in 2014 while in college and is excited to be a part of the team that makes this conference happen.
Before coming to AMP, Nic attended Wayne State University for a Bachelors of Art in Music. While there, they studied as a vocalist, performed in three ensembles and led two children’s choirs. After graduating in 2017, they moved to Milwaukee, WI where they worked as the digital sheet music creator for Hal Leonard Corporation. Two years later, Nic moved back to Detroit and joined the AMP family shortly after. They are thrilled to bring their attention to detail and organizational skills to the team.
Outside of the office, Nic can usually be found in the Detroit Institute of Arts, a local bookstore or coffee shop, or under a cozy blanket. In their spare time, they like to cook, read and do yoga.