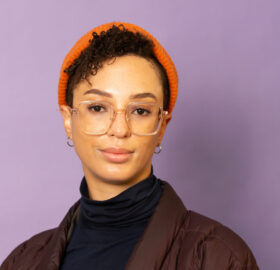 As Development Director, Sophia (They/Them/Theirs) leads a team of rain-makers and “glucose guardians” to organize the resources AMP staff and sponsored projects need to carry out their brilliant work. Since joining AMP in 2016, they have personally stewarded the flow of over $25 million to people and projects making media for liberation, in Detroit and beyond.

Sophia has been fundraising since college, when they started throwing house parties to raise money for the housing co-op they lived in while studying Critical Theory at UT Austin. Writing grants was an easy next step after stints in book publication, magazines, and freelance journalism. In 2015, they drove an ancient Volvo from California to Detroit, and never left.