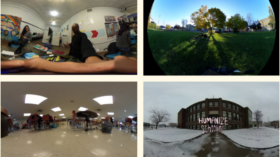 School Has One Syllable Film

People in Education (PIE) is a media arts organization that facilitates space for connection, curiosity and reflection. Media artists-in-residence are brought into learning spaces to facilitate student-led investigations and their research culminates into collaborative media projects. This short film is a visualization of the poem School Has One Syllable, written by Toni Willis, a youth from PIE’s Out of School Project and is a “poetic narrative speaking candidly about schooling and its dehumanizing complexity” where the “deep roots of a failing system are finally brought to light.” This 4 minute video was made with support from Digital Promise’s 360 Filmmakers Challenge, a partnership with Oculus VR for Good created to inspire the next generation of virtual reality creators. It was chosen as the Winner of the Learn & Grow Award from the 360 Filmmakers Challenge Fall 2017 National Showcase Competition.