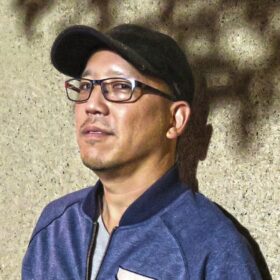 Scott Kurashige is professor and chair of the Department of Comparative Race and Ethnic Studies at Texas Christian University. He studies race in a comparative, intersectional, and transnational framework with a focus on urbanism, white supremacist violence, social movements, and revolutionary praxis. His research has especially focused on the relationship between Asian Americans and African Americans in the cities of Los Angeles and Detroit.

Kurashige is the author or co-author of four books: The Shifting Grounds of Race: Black and Japanese Americans in the Making of Multiethnic Los Angeles (2008)—winner of the American Historical Association’s Beveridge Award for distinguished book on the history of the United States, Latin America, or Canada, from 1492 to the present and the History Book Award from the Association for Asian American Studies; The Next American Revolution: Sustainable Activism for the Twenty-First Century with Grace Lee Boggs (2011); Exiled to Motown: A History of Japanese Americans in Detroit with the Detroit JACL History Project Committee (2015); and The Fifty-Year Rebellion: How the U.S. Political Crisis Began in Detroit (2017).

As a public scholar, Kurashige’s lifelong activist work began as a college student in 1988. He has been interviewed on multiple shows, including Democracy Now!, NPR’s Code Switch, MSNBC’s The Week with Joshua Johnson, and Thom Hartmann’s The Big Picture. His written commentaries have appeared in a wide range of progressive, scholarly, and mainstream media publications and websites, including Truthout, Huffington Post, CNN.com, and The Chronicle of Higher Education. He has served as president of the American Studies Association and a board member of multiple community and activist organizations. After meeting Grace Lee Boggs in 1998, he collaborated with her on writing and organizing projects for the next 17 years until she joined the ancestors.

The Next American Revolution: Radical Wisdom from Grace Lee Boggs

Drawn from 17 years working closely with Grace Lee Boggs and co-authoring her final book, The Next American Revolution: Sustainable Activism for the Twenty-First Century, this presentation highlights Grace’s key lessons for organizers, teachers, scholars, and anyone who seeks to understand the power of ideas. It will explain critical concepts at the core of Grace’s vision of revolution: the two-sided transformation of our selves and our structures; the primacy of growing our souls in the process of radical social change; the model of post-industrial Detroit as a self-governing and self-reliant community arising from the grassroots; and much more.

This lecture and slide show will contextualize the recent upsurge in anti-Asian violence and bias incidents by examining the historical roots of anti-Asian racism in war, colonialism, capitalism, and heteropatriarchy. We will develop an intersectional analysis that connects stereotypes of Asian Americans as “perpetual foreigners” to the exploitation of Asians as “disposable” labor, objectification of Asian women as objects of Western sexual fantasies, and racialization of Asians as a “yellow peril” threat during imperialist wars and the ongoing Covid-19 pandemic. We will close with a discussion of strategies advanced by Asian American activists that emphasize transformative justice over criminalization.

The “model minority” stereotype paints a false and racist image of Asian Americans as passive and apolitical. This lecture with slide show will provide an introduction to Asian American history from an intersectional social movement perspective that emphasizes the ongoing struggle against capitalism, white supremacy, and heteropatriarchy. We will analyze the sources of discrimination against Asian Americans (laws banning Asians from immigrating to the US or becoming citizens, the incarceration of Japanese Americans during World War II) in concert with examples of Asian American resistance, organizing, and activism.

The world is on fire. Capitalism and white supremacy are destroying life and spreading fascism. This presentation will provide the historical context, framework, and concepts we need to understand the liberal order that is collapsing, the multiple ways we see manifestations of systemic crisis, and the challenge to build a more democratic system in the face of well-financed and heavily-armed campaigns for authoritarianism. How to Survive Racism and Oppression in Higher Education This lecture, workshop, and/or consultation will provide insider knowledge and lessons from the perspective of a radical scholar-activist of color, who has survived over three decades in academia progressing from the ranks of student to tenured faculty, chair/director, and president of major professional association.