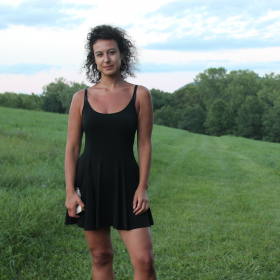 Taraneh Fazeli (she/they) is a chronically ill Iranian-American curator, writer, educator, and cultural organizer. Her work is rooted at the intersection of the disability, queer, and diasporic communities she calls home. She collaborates with artists and community groups to create exhibitions, publications, and programs supporting exchange across spaces – geographic, disciplinary, institutional, identity-based. She teaches at the City College of New York, lectures widely on ableism, time, accessibility, racial equity, and care, and has written for publications including Artforum, Art in America, Hyperallergic, and Flash Art. She received a 2022 Curatorial Research Fellowship from The Andy Warhol Foundation.

Taraneh is co-director of Poetic Societies, a Detroit-based non-profit that uses arts and healing technologies to focus on transnational celebratory cultural events to help participants regain ancestral knowledge lost due to migration, forced displacement, processes of enslavement, or colonization. She works outside of organizations collectively around various concerns: she co-founded Relentless Bodies, a Detroit-based creative disability and healing justice collective; is a member of Healing by Choice!, a circle of Women and gender non-conforming People of Color Health and Healing Practitioners; was a 2021 Detroit Equity Action Lab (DEAL) racial equity fellow at Wayne State University Law School; advises on disability justice and accessibility committees for organizations such as Allied Media; is a member of Crip Fund, a group of disabled artists and activists who came together to practice mutual aid shortly before the pandemic hit; was a core member of Canaries, an art collective and support group of people with auto-immune and other chronic disorders; was a member of Working Artists in the Greater Economy (W.A.G.E.); and was a member of Pedagogy Group, a collective of socially-engaged art educators.

For ten years (2006–16), she worked at NYC-based arts institutions such as Artforum, e-flux, Triple Canopy, and The New Museum. After hitting a wall in her ability to affect change from these politically-engaged but rather rarified spaces, she became an independent curator supported by the residency circuit. She still believed in art’s potential to constitute reparative cultural rituals, interrogate forms of representation, and dream more-just ways of being together, but had lost perspective on how to deal with its duality – as a powerful site of emancipation that’s often complicit in structures that transmit inequality. Since then, by engaging beyond perceived US-coastal and international “centers,” she developed a nuanced understanding of how to work with diverse artists and communities, developed a practice that supports their self-determination and thriving, and found senses of belonging in the arts she never had. In early 2019, Taraneh was hired as the Artistic Director of No Longer Empty to lead creative projects on mental health, race, and disability during a three-year partnership between the Art Therapy department at Bellevue Hospital and the Men’s Shelter at the old hospital location shortly before the COVID-19 pandemic hit and the organization closed.

Taraneh also wants you to know that she also makes delicious Kuku-sabzi, gives epic studio visits, has Virgo organizing skills, takes most of her Zooms from bed while sick or on very long walks when not, and has a mean right hook.